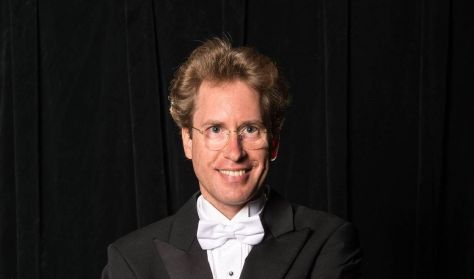 Jens Georg Bachmann was born in Berlin, Germany, and studied conducting and violin at the Hochschule für Musik “Hanns Eisler” Berlin and at The Juilliard School in New York.

Jens Georg Bachmann has been trained extensively through long-term mentorships. He…

Jens Georg Bachmann was born in Berlin, Germany, and studied conducting and violin at the Hochschule für Musik “Hanns Eisler” Berlin and at The Juilliard School in New York.

Jens Georg Bachmann has been trained extensively through long-term mentorships. He served for 7 years as musical assistant to James Levine at the Münchner Philharmoniker, the Verbier Festival & Academy, the Boston Symphony Orchestra–conducting this orchestra regularly in subscription concerts as well as at the Tanglewood Festival–and at The Metropolitan Opera in New York, conducting performances of The Magic Flute, Lucia di Lammermoor and Der Rosenkavalier. He also served for 2 years as assistant conductor to Christoph von Dohnányi at the NDR Elbphilharmonie Orchester in Hamburg, conducting the orchestra in several concert series and radio recordings.

At age 24 Bachmann made his conducting debut at both the Komische Oper Berlin and the Berlin Staatsoper. Mr. Bachmann had been Associate Conductor of the Fort Worth Symphony Orchestra and Principal Conductor of the Texas Chamber Orchestra as well as Music Director of the Crested Butte Music Festival in Colorado.

Equally at home in operatic as well as symphonic repertoire, in addition to the above, Bachmann has conducted the Florida Orchestra and the New Haven and Princeton Symphony orchestras in the USA, the Gävle Symfoniorkester and Royal Stockholm Philharmonic in Sweden, the Orchestre National de Lyon, the Berlin and Hamburg Symphony orchestras (leading the Hamburg Symphony on its first US tour in 2005), the Konzerthausorchester Berlin, the NDR Radiophilharmonie Hannover, the Nuremberg and Stuttgart State Operas, the Deutsche Oper am Rhein Düsseldorf as well as the Royal Swedish Opera.

Mr. Bachmann has collaborated on stage with some of the world’s finest musicians such as violinists Pinchas Zukerman and Daniel Hope, pianists Yefim Bronfman, Marc-André Hamelin and Andreas Haefliger; among the singers are Renée Fleming, Susan Graham, Natalie Dessay, Christine Brewer, Marcello Giordani, Jonas Kaufmann, Mariusz Kwiecien and Albert Dohmen. In addition, Bachmann collaborated with the comedy duo Igudesman & Joo for their American orchestral premiere in the summer of 2011.

Mr. Bachmann has recorded for the DaCapo and Naxos labels.

A Postcard From Vienna